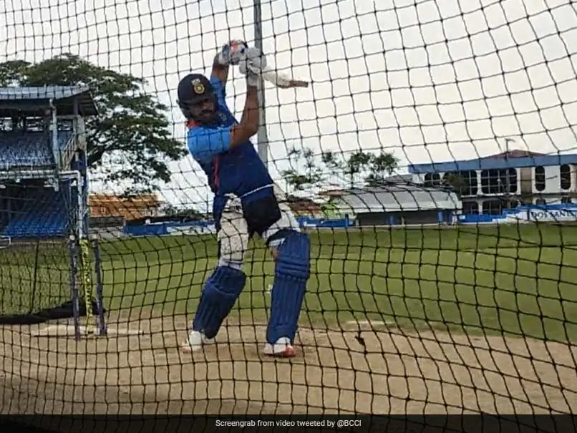 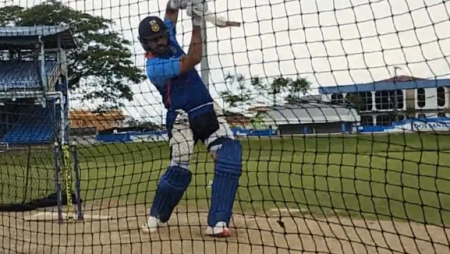 Rohit Sharma Practices In Nets Ahead Of First T20I Against West Indies. Sharma worked hard in the nets ahead of the first T20I against the West Indies.

Rohit Sharma will return to action in the upcoming five-match Twenty20 International series against the West Indies, which begins on Friday. The skipper was rested for the ODI series, but he will now look to score big runs with the bat to help India win another bilateral series. Rohit had an intense training session before the first T20I, in which he demonstrated a wide range of shots. The video was shared by the BCCI’s official Twitter handle, and it shows Rohit practicing both attacking and defensive shots.

Prior to the series, Rohit addressed a press conference on Thursday, claiming that India was not playing conservative cricket in the shortest format last year in preparation for the World Cup.

“We didn’t get a result in the World Cup, but that doesn’t mean we played bad cricket. And I disagree that we were playing conservative cricket; if you lose 1-2 World Cup matches, it appears that we did not take risks. If you look at the games we played prior to the World Cup, we won 80% of them. I don’t understand how you can win so many matches while being so conservative “Rohit stated.

“We lost the World Cup, which can happen, but it did not happen because we were not playing freely. We haven’t changed anything drastically recently; we’ve simply given players more freedom to express themselves. Performances will emerge if you play freely. People on the outside should keep the peace; the way we play cricket, there will be failures and results that do not go our way, but that is okay because we are trying something new. It is possible for mistakes to occur, but this does not imply that the players are inept. Everyone must change over time; we are changing, so those on the outside must also change “He continued.