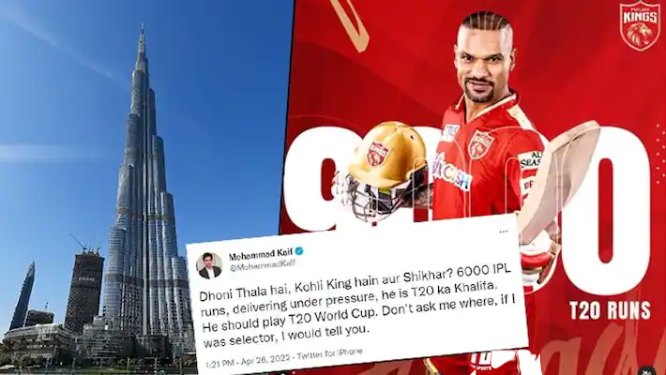 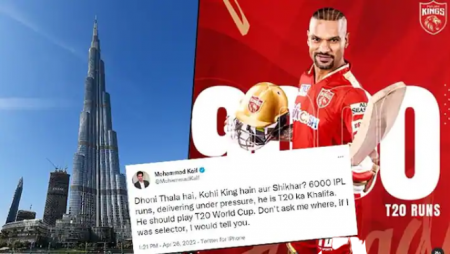 Punjab Kings won their fourth game in eight in IPL 2022. Moving them up to sixth place in the points table. Punjab Kings defeated Chennai Super Kings by 11 runs at Mumbai’s Wankhede Stadium on Monday. With veteran opener Shikhar Dhawan scoring an unbeaten 88 off 59 balls. In the process, Dhawan surpassed 6,000 IPL runs, becoming only the second player in the tournament to do so after Virat Kohli. Following Dhawan’s heroics with the bat, former India cricketer Mohammad Kaif praised him and backed his inclusion in the Indian squad for the T20 World Cup later this year.

“Dhoni Thala, Kohli King, and Shikhar? He is T20 ka Khalifa, having scored 6000 IPL runs and delivering under pressure. He should compete in the T20 World Cup. Don’t ask me where I’d go if I were a selector; if I were, I’d say, “Kaif posted on Twitter.

Dhoni Thala, Kohli King, and Shikhar? He is T20 ka Khalifa, having scored 6000 IPL runs and delivering under pressure. He should compete in the T20 World Cup. If I were a selector, I would tell you where.

Dhawan played his 200th IPL match on Monday. Becoming only the eighth cricketer to do so.

Dhawan is now only one run behind Kohli in terms of total runs.

Dhawan, on the other hand. Managed to get one over Kohli when he reached the nine-wicket mark on Monday. The 36-year-old is now the IPL’s leading run-scorer against CSK. He surpassed Kohli, who has 949 runs in 28 innings against the four-time IPL champions CSK at an average of 39.54.

On Monday, Dhawan’s knock was threatened by Ambati Rayudu, who hit a blistering 78 off 39 balls for CSK, bringing them dangerously close to the target.

However, it was not enough as CSK fell 11 runs short to remain in ninth place in the IPL points table with only two wins in eight games.