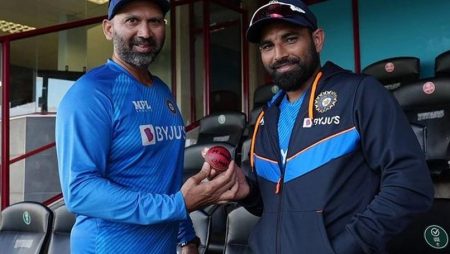 Mohammed Shami Explains: After the third day’s play, Mohammed Shami told bowling coach Paras Mhambrey that the celebration was for his father. Shami’s father died in 2017. His 200th Test wicket was dedicated to his father by the fast bowler.

After completing his 200th Test wicket in the first Test against South Africa at the SuperSport Park in Centurion, India pacer Mohammed Shami seemed to be sending on a message to someone with both arms up in the air and a big smile on his face. For the right-arm seamer, it was more than pleasure; it was a sensation of relief blended with thoughts of contentment. It turned out to be the case. After the third day’s play, Shami told bowling coach Paras Mhambrey that the celebration was for his father. Shami’s father died in 2017. His 200th Test wicket was dedicated to his father by the fast bowler.

Mohammed Shami Explains: “My father had died away in 2017, thus the joy after achieving 200 wickets was for him. He deserves all of the credit for my accomplishment; I had a wonderful upbringing. I just wanted to give credit to my father since he was always there for me “On BCCI.TV, Shami told bowling coach Paras Mhambrey.

On Day 3, Shami was outstanding, taking five wickets to help India bowl South Africa out for 197 and take a commanding 130-run lead in the Boxing Day Test. The 31-year-old dismissed Kagiso Rabada to become the fastest Indian to attain 200 wickets (in terms of balls bowled).

Shami expressed his gratitude by saying that he was “glad” to contribute to the team’s cause.

“I was just thinking about how wonderful the effort has been, and I thought a five-wicket haul would be nice. In Test cricket, I also passed the 200-wicket milestone, which is a good and satisfying feeling. I believed I had accomplished something when I took 100 Test wickets; after 200, I am feeling great, and all I want to do now is keep performing for the team. The more you appreciate cricket, the better the performances get “Added he.

For instance, In his ten overs, the UP-born cricketer took 5 for 44 as India took complete control of the opening Test.

India lost starter Mayank Agarwal cheaply, but by the end of Tuesday’s play, they were 16 for 1, with a 146-run lead. Therefore, KL Rahul, the first innings centurion, was at the crease alongside nightwatchman Shardul Thakur.