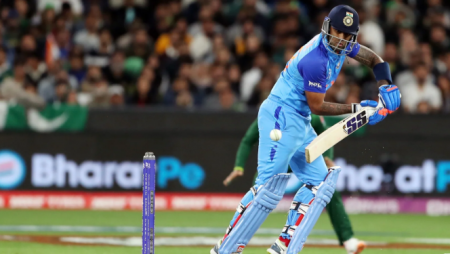 Suryakumar Yadav, the prodigious Indian hitter, has been on the rise since his debut in international cricket. He has been outstanding for Team India in T20 cricket. His distinct stroke ranges and ability to place the ball in the gaps are uncommon in current cricket. Yadav has the ability to beat the bowler and exploit his own abilities.

The Mumbai-born batsman’s T20 exploits have earned him a place in the ODI and Test squads for the forthcoming series against New Zealand and Australia. Despite receiving regular opportunities in the format, he has yet to produce a significant score in ODI cricket.

Kapil Dev, an Indian cricket icon, stated that he could not comprehend the team management’s decision to withdraw Suryakumar Yadav from the ODI squad. Sky, he believes, is a match winner and can win games with the kind of strokes he possesses.

“Having said that, they should have one set of teams for a period of time,” the World Cup-winning captain told Gulf News. An unusual individual can be transform. That makes sense to me. But if your Man of the Match (Suryakumar Yadav) gets drop the next day and someone else comes in, we don’t understand.”

In comparison to other cricket analysts and experts, Kapil Dev viewpoint was quite different.

He argued that there should be three distinct teams for each of the three forms since it would provide more players opportunities.

“I think we should leave it to the cricket board what they (selectors) intend,” the great skipper continued. Because there will be so many cricketers, everyone should receive an opportunity to play. From what I can tell, they will have three teams: one for T20Is, one for ODIs, and one for Tests. That manner, you can have a bigger pool”.

Team India are set to play 17 more ODIs along with the Asia Cup before heading into the ODI World Cup in October. This would be a great chance to test out all your players and formalize a proper squad full of talent and experience.

Also Read: There can be an ODI and Test captain, as well as a separate T20I captain: Shahid Afridi.