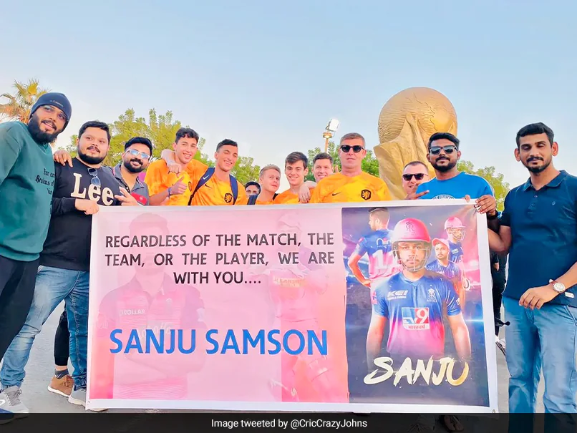 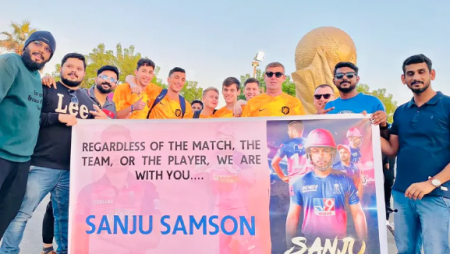 Fans Show Their Support For Batter During the FIFA World Cup. Fans at the ongoing FIFA World Cup showed their support for Sanju Samson, and the photo has gone viral on social media.

Right-handed batter Sanju Samson was once again bench from India’s playing XI for the second ODI against New Zealand. After the match was called off due to rain, skipper Shikhar Dhawan explained that the management wanted a player who could also bowl a few overs. Deepak Hooda was preferred over Samson. Fans, on the other hand, were unimpressed. Throughout the day, there were cries to find a method to keep Samson in the lineup on a regular basis.

Sanju Samson hit 36 runs off 38 balls with four boundaries in the opening ODI against New Zealand.

Fans at the 2018 FIFA World Cup have shown their support for the Indian batter, and the photo has gone popular on social media.

The official Twitter account of Samson’s IPL side, the Rajasthan Royals, posted a photo of supporters cheering on the batter at the FIFA World Cup.

After the second ODI was called off due to rain, India captain Shikhar Dhawan explain. “We wanted the sixth bowler to come in, so Sanju Samson missed out and Hooda came in.”

Rain forced the cancellation of India’s second One-Day International (ODI) against New Zealand. India were 89 for 1 in 12.5 overs when rain stopped play, forcing the game to be abandoned.

The contest had already been restricted to 29 overs each side owing to rain. The next interruption force the play to conclude without a result.

New Zealand captain Kane Williamson won the toss and chose to bowl against India in the game.

The third and final ODI between India and New Zealand will be played on Wednesday in Christchurch. New Zealand now leads the series 1-0.