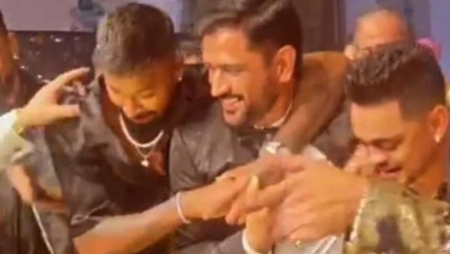 Hardik Pandya had a great time with former India captain MS Dhoni and well-known rapper Badshah. After successfully leading the Indian squad to a T20I series victory against New Zealand. The likes of Hardik, Dhoni. And Badshah can be see swaying their legs to one of the rapper’s most well-known songs in a video that has leaked online. Several users on social media have claimed the video is from Dubai, even though the exact time and place of the recording are unknown.

Read also: On India Star, Ravi Shastri said, “There’s Something Regal About Him, Is Always Grounded.”

In Rohit’s absence, Hardik led the Indian side in the T20I series against New Zealand; he will not play in the ODI match against the Kiwis. The Indian team is being led by Shikhar Dhawan in the 50-over task.

Only was see at the US Open at Arthur Ashe Stadium attending a tennis match. Along with former Chennai Super Kings and India teammate Kedar Jadhav, he also enjoyed rounds of golf.

The second ODI against New Zealand, which was part of the Indian cricket team’s current assignment, was called off owing to weather. Earlier on Friday, the Indian squad had suffered a 7-wicket loss in the first ODI.

Many veteran players, including Virat Kohli, Rohit Sharma, KL Rahul, Mohammed Shami, and others, aren’t playing in the ODI series against New Zealand because they needed a break from the demanding T20 World Cup campaign in which India was defeated in the semi-finals.