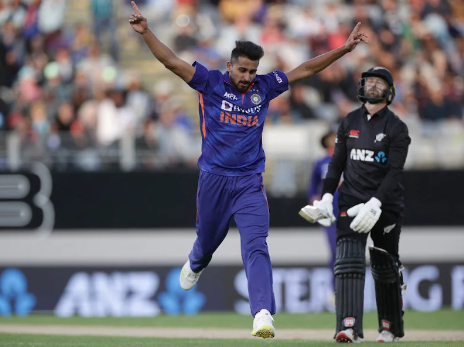 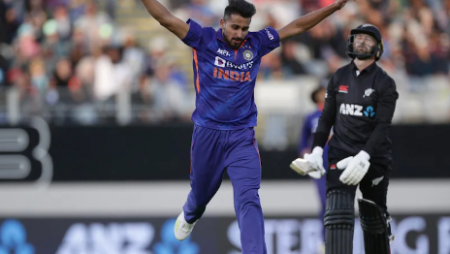 Devon Conway is dismiss by Umran Malik, who also captures his first ODI wicket. Umran Malik made his eagerly anticipate ODI debut on Friday. When he was select for the starting lineup of the opening match of the three-match series against New Zealand.

Umran Malik made his eagerly anticipated ODI debut on Friday. hen he was selected for the starting lineup of the opening match of the three-match series against New Zealand. Immediately after dismissing Devon Conway, the fast bowler also removed Daryl Mitchell from the game. On the first delivery of the 16th over, Umran claimed Conway, who was caught by wicketkeeper Rishabh Pant for his first wicket of the game.

Conway tried to drive it but could only achieve a slight outside edge since it was a full, rapid, and wide ball delivered outside off stump. Rishabh Pant was able to catch it with ease.

Soon after, Umran defeated Daryl Mitchell, and in his ODI debut, he had an immediate effect.

After being assigned to bat first in the ongoing first ODI, Team India scored 306/7 in 50 overs.

Team India’s left-handed hitter Shikhar Dhawan is in charge of the current three-match ODI series against New Zealand. The seasoned pro demonstrated his mettle against the hosts with a knock of 72 in the first ODI. A 124-run first wicket partnership with Shubman Gill. Before the opening ODI, former Team India head coach Ravi Shastri lauded Shikhar Dhawan. Also, Claimed that the left-hander does not receive the recognition he truly merits.

“He’s vastly experienced. He doesn’t get the accolades that he deserves. To be honest, most of the spotlight is on Virat Kohli and Rohit Sharma. But when you look at his one-day cricket record, and you look at some of the innings he has played against top teams in big games, it’s an outstanding record.”