Report: Ravindra Jadeja Is Not Likely To Be Fit For Bangladesh Tests, With Suryakumar Yadav’s Inclusion Being Speculated. 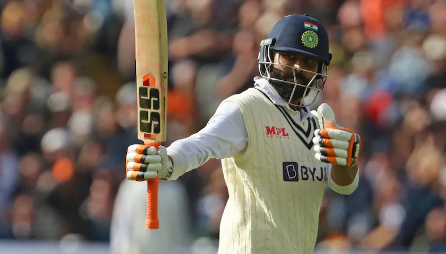 According to BCCI sources, veteran all-rounder Ravindra Jadeja is unlikely to fully recover before the Bangladesh Test series. Which begins on December 14 in Chittagong. There is some debate over whether India needs a fourth specialist spinner given that they already have off-spinner R Ashwin. Left-arm wrist spinner Axar Patel, and left-arm wrist spinner Kuldeep Yadav in their ranks. If they’re looking for a straightforward replacement, Saurabh Kumar, an India A bowler, will do.

However, there are rumors that a new selection committee. Or the management of the Indian team (in the event that a new committee has not yet been constituted). Would take advantage of Suryakumar Yadav’s excellent performance and include him in the lengthier version. India is schedule to play two tests and three one-day internationals in Bangladesh, and Rohit Sharma’s whole squad will go there.

Following a brief three-match ODI series in the first week of December, India will play two Test matches from December 14 to 18 in Chittagong and from December 22 to 26 in Mirpur.

Read also: Martin Guptill gets remove from the central contract list by New Zealand in order to play in international T20 leagues.

After the Asia Cup in the United Arab Emirates, Jadeja undergo knee surgery and was subsequently sideline indefinitely.

“Jadeja has been to NCA for his check-up and rehab on a number of occasion. However as of now, it is unlikely that he will be fit for the Bangladesh series. In any case, Chetan Sharma-led former selection committee had kept him in the squad subject to fitness,”

Unnamed BCCI source with knowledge of the developments told PTI.

There is still time to make the replacement announcement.

Earlier this year, during the series against Sri Lanka, Saurabh was a member of the Test squad. Additionally, he amassed five wickets against New Zealand A in a test series in Bengaluru.

The second option, however, might be more daring because it’s challenging to choose a fourth spinner with Ashwin, Kuldeep, and Axar present.

Read also: Glenn Maxwell criticizes the media for distorting his comments over Australia’s early withdrawal from the T20 World Cup. – ‘Bugger media, it can go stuff itself’