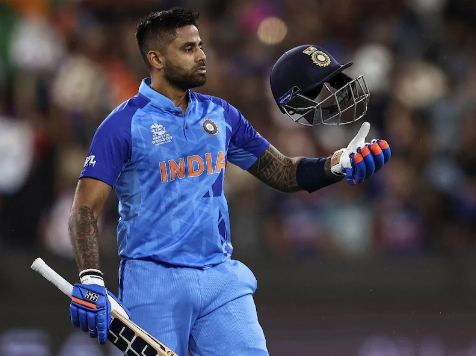 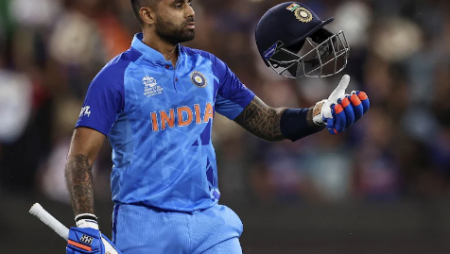 In the most recent ICC T20I rankings, which were revealed on Wednesday. India’s in-form batsman Suryakumar Yadav maintained his top spot in the batting order. The left-arm pacer Arshdeep Singh moved up to a career-high 23rd spot among bowlers. The T20 World Cup is already underway, and Yadav, who has been in excellent form. Has accumulated 225 runs from five games at a strike rate of around 200. In the format, he continued to be the best batter with a rating of 869 points. Which was a career high.

Yadav scored 61 runs off only 25 balls in India’s last group game. Putting him 39 points ahead of Pakistan’s Mohammad Rizwan in the latest standings.

Devon Conway of New Zealand comes in second on the list, 90 points after Yadav, and Pakistan’s captain Babar Azam comes in fourth, seven points after the Kiwi.

Virat Kohli and skipper Rohit Sharma are currently in positions 11 and 18, while India vice-captain KL Rahul is now in position 16 after to his half-centuries against Zimbabwe and Bangladesh.

Read also: To ensure that they can go to the T20 World Cup semifinals, England will give Dawid Malan and Mark Wood as much time as possible.

Sri Lanka’s Wanindu Hasaranga is back at the top of the T20I World Cup wicket-taker’s list. England’s Adil Rashid moves up one place to eighth in the all-rounder’s rankings.

With his timely wickets, Arshdeep has moved up four spots in the bowling rankings to move into the 23rd spot, one spot below his Pakistani opponent Shaheen Shah Afridi, who is quietly improving in Australia.

On the other side, veteran spinner Ravichandran Ashwin has moved up five spots to 13th after taking three Zimbabwean wickets.

Rashid Khan’s reign as the best spinner in the world came to an end when Hasaranga grabbed 15 wickets during Sri Lanka’s Super 12 finish in the T20 championship, reclaiming the top rank he previously held in November of last year.

Sean Williams of Zimbabwe is the sole newcomer in the top 10 all-rounders rankings, while Pakistan’s Shadab Khan rose 10 spots to position 15.

Adil Rashid of England has moved up to eighth place in the rankings for bowlers, only one position below his countryman Sam Curran.