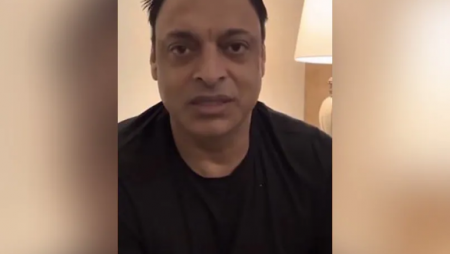 South Africa’s T20 World Cup campaign came to an end on Sunday. Temba Bavuma’s team was defeated by the Netherlands by a score of 13 runs. Pakistan’s semi-final prospects were dependent on South Africa losing against the Dutch, and this is exactly what occurred. Following South Africa’s loss, Pakistan trounced Bangladesh to go to the semi-finals alongside India from Group 2.

Shoaib Akhtar released a video before the Pakistan-Bangladesh game in which he said that South Africa had lived up to their reputation as chokers.

“I’ve just awoken. Thank you very much, South Africa. Chokers aap bahut bade hai (you are very big chokers). You have given Pakistan a great opportunity, and we are grateful. After losing to Zimbabwe, I didn’t think Pakistan deserved to get to the semi-finals, but Pakistan has been handed a lifeline. We need to visit India again and again “In the video, Akhtar said.

“Thank you, South Africa. You’ve lived up to the ‘c’ word. It’s worked in our favor. Pakistan, now remain tight. Go ahead and win this,” Akhtar captioned the photo.

For the uninitiated, South Africa is notorious for buckling under duress at ICC tournaments, which is one of the main reasons they have yet to win an ICC crown.

Following the game, which the Proteas lost by 13 runs, head coach Mark Boucher discussed what went wrong for his team.

“When we woke up, I think our energies were low. Whether that’s because it’s a half-past-10 game, times have been quite difficult, I don’t know, I haven’t really put my finger on it. Haven’t had a chance to speak to the guys yet and find out where they sort of feel it went wrong,” Boucher said in the post-match press conference.

“I believe our plans were present, but we did not put them to good use. Looking at the game as a whole, I believe the Netherlands out-bowled us. They bowled with excellent intentions, bowled to the longer side of the field, and they just put more pressure on us than we could put on them “He said.

South Africa fell 13 runs shy of chasing down 159 against the Netherlands. South Africa’s bowling strategy backfired as Colin Ackermann took a special like to Kagiso Rabada at the end.