Dinesh Karthik on Rohit Sharma: “His Ability To Play Fast-Bowling Second To None” 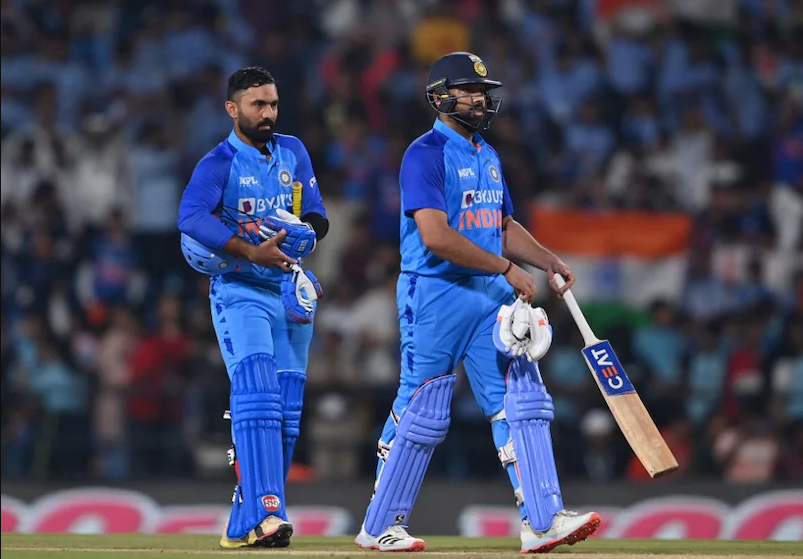 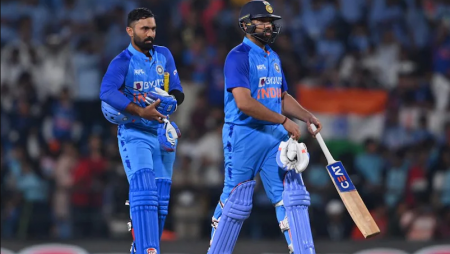 The present three-match T20I series between India and Australia is level after the hosts won the rain-shorten the second T20I by six wickets on Friday at the VCA Stadium in Nagpur. Chasing 91 in eight overs, skipper Rohit shone with the bat, scoring 46 runs off 20 balls with four fours and four sixes. Dinesh Karthik delivered the finishing touch, smashing a six and a four to secure the game for Team India.

Following the game, Karthik states in a post-match news conference about why Axar Patel was sent ahead of him in the first T20I, how he prepares for the finisher position, and what makes skipper Rohit genuinely a world-class player.

“Look, I’ve been training for this for a long time, and I’ve been doing it for RCB, and I’m thrilled to be doing it here. It is a constant routine that establishes through time. I do a lot of scenario practice in my spare time. Vikram Rathour and Rahul Dravid have both been accommodating in terms of how and what shots I want to practice. I’ve been extremely particular about it; I don’t practice much, but I try to be as specific as possible “Karthik stated.

Also read: “Where He Gets Into Trouble Is…”: Sunil Gavaskar Responds to Rohit Sharma’s Classy Knock in Nagpur T20I

“Rohit Sharma performed admirably. I only had two balls, so I did my best. It is difficult to play such strokes against the new ball, especially against top-tier new ball bowlers. It demonstrates why Rohit is such a major factor in international cricket, not just in Indian cricket. His ability to play against fast-bowling is exceptional, and this is what genuinely distinguishes him ” he states

When asked why he sent Axar ahead of him in the first T20I, Karthik explained: “This is a valid question. We are experimenting with it. They (management) believe there may be a couple of overs when Axar Patel can target the spinner and take them on. That was the rationale at the time, and having a left-hander bowl against a leg-spinner is a strong matchup. We try to use that option on occasion, depending on how the game is unfolding at the time.”

Team India made two changes for the second T20I, bringing in Jasprit Bumrah and Rishabh Pant in lieu of Umesh Yadav and Bhuvneshwar Kumar.