“One of the best team environments” Dinesh Karthik says of the current coaching setup. 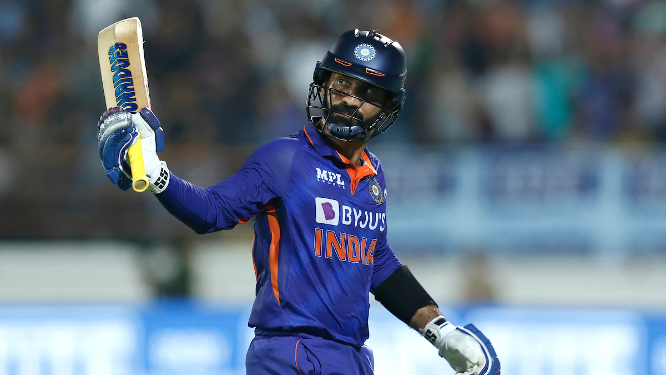 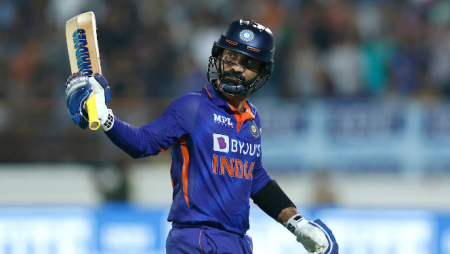 “One of the best team environments” Dinesh Karthik says of the current coaching setup. Dinesh Karthik has scored 174 runs in 13 T20Is since his return to the national team.

Dinesh Karthik has had a fantastic 2022. Making his way back into India’s T20I playing XI after strong performances for Royal Challengers Bangalore in the IPL 2022. Since his return, the right-handed batter has appeared in 13 T20Is this season. Scoring 174 runs and claiming the finisher spot. Karthik shine in the first T20I of the five-match series against the West Indies. Scoring 41 runs off just 19 balls to help India score 190 runs.

Karthik spoke at a press conference ahead of the fourth T20I about his performances and expectations.

“At this point in time, pressure is a luxury. As a cricketer, it is something that is only given when you are performing at the highest level and people expect certain things from you, so I am grateful. What is important, I believe, is that on any given day, regardless of the match situation. You read the match situation and do your best on that particular day. “During a press conference, Karthik responded to an NDTV question.

Karthik said When asked about what he has worked upon in his game: “Power-hitting. That is something I have worked on; I wish I had done it sooner in my life, but for the time being, it is going well. Extremely happy; this is what I’ve worked for my entire life; for the captain and coach to have such faith in me, it’s only fair that I repay it by giving the team performances that will help the team cross the finish line. The amount of love and affection I have received, not only from the team and the fans, but also from captain and coach, has made me the happiest I have been as a member of the Indian team.”

“Finisher is a difficult role to maintain consistency in. You should be able to make an impact that benefits the team every time you come in. There are many factors that can make it difficult for you, especially in the Caribbean and Miami, where wind is a major factor. Even though it is a sport played with a heavy ball, the wind can dictate where you play your shots at times. The bowlers are cunning, and they try to force you to hit into the wind as much as possible. That makes it even more difficult “He continued.

Dinesh Karthik: “The best team environment and praised the coaching staff for maintaining consistency and continuity.”

“I think I’ve said it before and will say it again: I believe this is one of the best team environments I’ve been in because of the consistency and continuity they appear to be providing to players. They are not judged on a daily basis, and they are given time and the opportunity to fail. I believe it is critical to allow players to fail before moving on to the next player “Karthik stated.

“With so many players in India right now, the general feeling is that the one who is playing is always better than the one who has played the game.” I believe that a lot of credit should be given to Vikram Rathour, Paras Mhambrey, and Rahul Dravid for having that mindset in which they don’t get carried away by good-looking players and are able to understand what a player must have gone through to give a failure on a given day and back them up and have the right conversation with them so that they can get the right performance from the player. The best teams in any sport have been able to maximize their talent, and this current Indian team is doing just that.” he added.