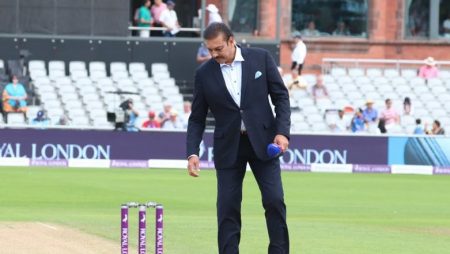 Ravi Shastri supports Shahid Afridi’s proposal to shorten the ODI format. Ben Stokes’ retirement from ODIs at the age of 31 has raised concerns about the format’s future.

Former India head coach Ravi Shastri believes that the ODI format. Should be reduced from 50 to 40 overs to avoid extinction. While the emergence of the T20 format was expected to erode the Test format. This has not occurred, and instead, the 50-over format has taken a toll. With so many T20 leagues around the world, fans are much more interested in watching the shorter formats.

Interestingly, Test cricket has taken a different path and is becoming increasingly popular. Totals are being chased down in the fourth innings, putting the ODI format’s future in jeopardy. Ben Stokes’ retirement from One-Day Internationals at the age of 31 came as a complete surprise to the entire cricketing community, and it is therefore critical to address the situation before another valuable talent departs from the format.

It stayed at 50 for far too long: Ravi Shastri

Shahid Afridi had previously proposed reducing the number of overs in the ODI format from 50 to 40, citing that the format is no longer as interesting as it once was. Shastri echoed Afridi’s words, stating that shortening the span will undoubtedly work, citing examples from the 1983 World Cup, in which 60 overs were played per innings. He feels the need to look ahead, noting that the ODI format has been played for a long time in 50-over formats.

“One-day cricket has become quite boring in recent years.” “I would suggest reducing ODI cricket from 50 overs to 40 overs to make it more entertaining,” Shahid Afridi said after Stokes’ retirement in an interview with Samaa TV.

“There is no harm in shortening the game’s duration. When one-day cricket first began, it consisted of 60 overs. We won the World Cup in 1983 with a total of 60 overs. People began to believe that 60 overs were excessively long after that. People found the range of overs between 20 and 40 difficult to swallow. As a result, they reduced it from 60 to 50. So, years have passed since that decision, so why not cut it from 50 to 40 now? Because you must think ahead of time and evolve. “It stayed at 50 for far too long,” Shastri said on Fancode during the second ODI between India and the West Indies.