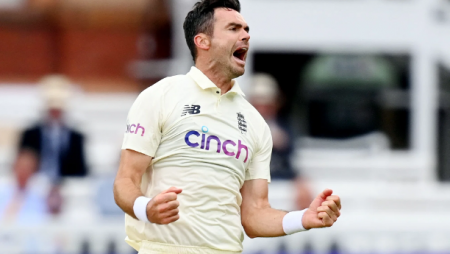 ENG vs. IND: James Anderson Returns After Named in Playing XI. James Anderson has been named to the playing XI for the rescheduled 5th Test against India.

Despite poor performances against New Zealand, openers Alex Lees and Zak Crawley remain in the team.

After an impressive performance in the recently concluded series whitewash against the Kiwis. Ollie Pope is set to continue at No.3.

The rest of the batting order consists of the in-form Joe Root and Jonny Bairstow, as well as captain Ben Stokes.

The veteran duo of Anderson and Stuart Broad will spearhead their bowling attack.

England is also sticking with young Matthew Potts, who impressed in his debut series against New Zealand.

Jack Leach was also chosen for his left-arm spin.

India leads the series 2-1 after victories at Lord’s and The Oval last year.

The fifth Test, scheduled for Manchester, was rescheduled due to a COVID-19 outbreak in the Indian camp.