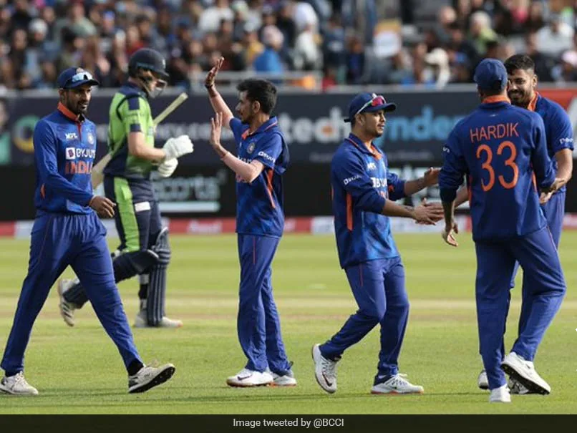 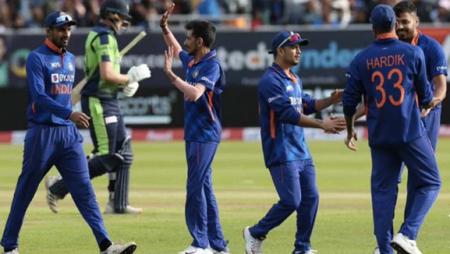 India will be hoping for clear skies and improved performances from rookies like Umran Malik. When they face Ireland in the second and final T20 on Tuesday at Malahide in Dublin. The rain had reduced the series opener to 12-overs a side. With a rather bleak forecast for match day, it could be another shortened game. Ruturaj Gaikwad did not bat on Sunday due to a calf strain. He could be the only change in the playing eleven if the opener does not recover fully.

With a full squad to play in the T20s against England next month. The final match against Ireland provides another opportunity for the younger players to demonstrate their abilities.

Also Read: Ex-England Cricketers Perform Dhol to ‘We Will Rock You’ During India vs Leicestershire Tour Game

Sensation of speed Umran Malik will be among those eager to make an impression.

It is unfair to judge him based on his only over on Sunday. But he was all over the place, indicating that nerves got the best of him.

It was the sixth over of the innings, the ball was relatively new.Harry Tector, 22, capitalized on Malik’s extra pace.

Hardik Pandya, the captain, has already stated that Malik is better off bowling with old ball and coming into play only after the powerplay.

With the conditions allowing him to move the ball both ways, Bhuvneshwar Kumar is likely to cause problems for the Ireland batters once more. Avesh Khan struggled in the death overs and will be looking for a better performance.

The Indian bowlers will be wary of Tector’s threat. The Irish batter drew a lot of attention for his fearless performance in the first T20 after his team was in a lot of trouble.

Some of his shots drew praise even from the Indian players. Another devastating blow to the game’s powerhouse could help Tector land a life-changing IPL contract.

“Some of his shots were mind-blowing,” Hardik said after the seven-wicket victory.

Ireland will take heart from how they fought back with the bat. But their bowlers will need to step up their game against a formidable batting line-up.

The pacers struggled to find the right length at the start of the innings, allowing the Indians to score easily.

Craig Young got the ball to swing and seam, and he inspired his fellow fast bowlers. To put up a better performance against the mighty Indians. It’s not every day that they get to play a team like India, so they’ll want to take advantage of the opportunity.

In the over that yielded 21 runs, Hardik and Hooda, who did well as a makeshift opener in Gaikwad’s absence, targeted off-spinner Andy McBrine. McBrine would look for ways to contain the right-handers after serving a harsh lesson.

Suryakumar Yadav’s return from injury to international cricket lasted only one ball, and he will be looking to get back to his consistent ways.

Also Visit: Trent Boult is on fire on Day 2 of the third Test between England and New Zealand.