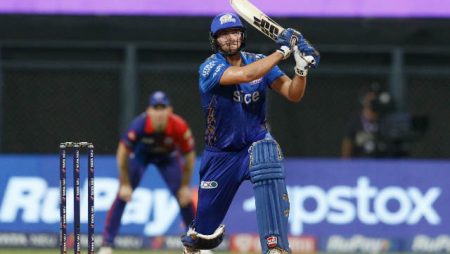 Tim David following his match-winning cameo against DC. With his blistering knock, David took advantage of that opportunity and knocked Delhi out of the tournament.

Mumbai Indians defeat Delhi Capitals, and the home crowd was given a hearty send-off at the Wankhede Stadium. Tim David, their new acquisition, played a match-defining knock of 34 runs in 11 balls. After the game, David revealed that he worked extremely hard on his shape. After struggling in the early stages of the tournament.

The Singaporean, who was given an early reprieve. Took full advantage of the opportunity and knock Delhi out of the tournament with a blistering knock. The loss kept Royal Challengers Bangalore in fourth place. While Delhi fell two points short of making the IPL 2022 playoffs. Needless to say, RCB fans lauded David’s knock, which effectively sealed the three-time finalists’ place in the playoffs.

“Ishan (Kishan) told me the wickets getting flatter, that it was holding a little bit with the slower balls, but all I had to do was hold my shape and back my game, keep it simple.” I struck gold with a couple of baby sixes. “It’s all about repetition and keeping your shape,” Tim David said after the match. “Early in the season, I am leaning back on the ball a little, so I work really hard on my shape and am please with the outcome.” “We’ve had a difficult season, but we’ve played some good cricket,” he added.

Before the game, Tim David received a message from the RCB players.

The Royal Challengers Bangalore’s victory over Gujarat Titans meant that they needed Mumbai to defeat Delhi in order to make the playoffs. The RCB’s Virat Kohli and Faf du Plessis made no secret of their support for the Mumbai team in the game. The RCB camp seen celebrating after Mumbai’s win over DC, which advanced them to the playoffs.

David, a former RCB player, revealed that he did receive a message from the RCB players prior to the game. “I got a message this morning from Faf – it was a picture of him, Maxi, and Virat all in a MI kit, maybe I’ll get to post that on Instagram later,” said the MI batter.