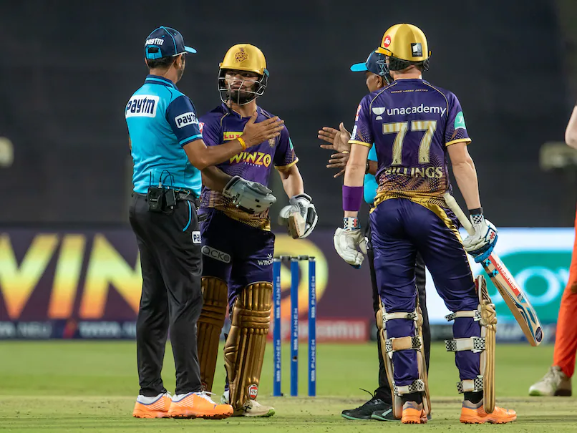 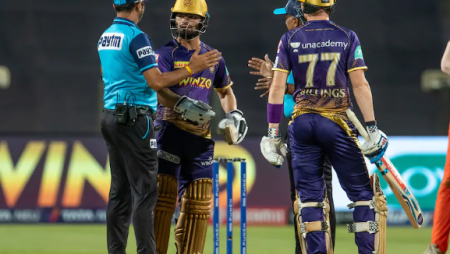 Rinku Singh of KKR Argues With Umpire Over DRS After Being Denied A Review. Confusion reign supreme in the 12th over of KKR’s crucial win over SRH after Rinku Singh given out LBW off T Natarajan.

In the 12th over of Kolkata Knight Riders’ 54-run win over SunRisers Hyderabad in the Indian Premier League (IPL) 2022 on Saturday, Rinku Singh was given out LBW off T Natarajan’s bowling. The umpire deliberated for a long time before finally raising his finger. As the timer for the DRS review expired, Rinku seen arguing with the umpire, implying that he had requested the review, but the umpire refused, claiming that the time had expired. Rinku finally turned and walked back to the pavilion after a lengthy discussion.

Also Visit: The BCCI welcomes the arrest of suspects in the alleged fixing of IPL matches.

Rinku Singh of KKR Argues With Umpire Over DRS

The umpires did not consider the gesture made by Sam Billings for the review because Rinku did not make it.

Rinku was fired after only 5 of 6 deliveries.

After winning the toss and electing to bat, KKR amassed a total of 177/6 thanks to a 63-run stand between Andre Russell and Sam Billings, who fell for 34 in the penultimate over.

Russell then hit three sixes off the final over, bowled by Washington Sundar, to help KKR finish strong.

The West Indian all-rounder finished unbeaten on 49 off 28 balls, with three boundaries and four sixes.

The total was large enough, and KKR restricted SRH to 123/8 to significantly increase their net run-rate.

Russell also shone with the ball, taking three wickets as SRH was always behind the eight ball in their chase.

With the victory, KKR kept their slim playoff hopes alive.

Also Read: Shoaib Akhtar on Umran Malik: “I’ll be happy if he breaks my record.”