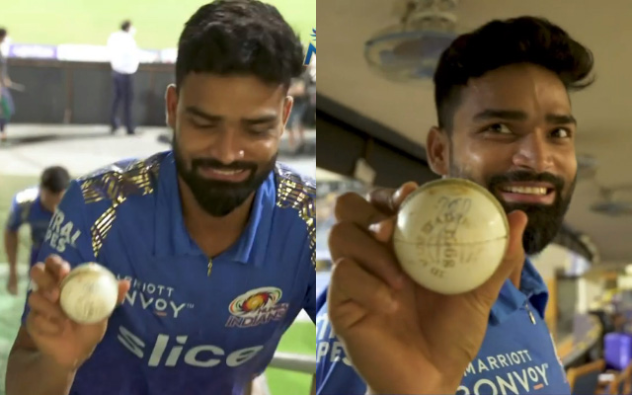 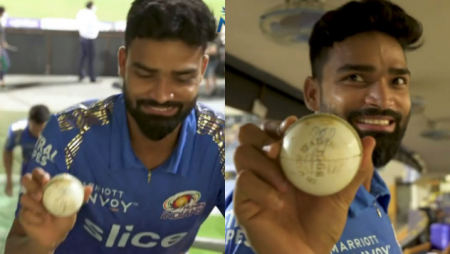 Kumar Kartikeya was a key bowler for the Mumbai Indians during their IPL 2022 match against archrivals Chennai Super Kings on May 12 at the Wankhede Stadium in Mumbai. His 2/22 figures were crucial in limiting the defending champions to a meager 97. While Kartikeya has emerged as one of the season’s rising stars, he also had the opportunity to show off his prized possession.

The prized possession is a signed match ball by none other than the legendary MS Dhoni. The two-time World Cup winner is usually interacting with the youngsters after an IPL match. This time it was Kumar’s turn to get some valuable advice from inarguably the sharpest cricketing mind. It prove to be a memorable moment for the left-arm spinner.

In a video posted by the Mumbai Indians on their official Twitter account. The MI players are seen walking back to the dressing room after the game, and Kumar Kartikeya is seen holding a ball. When question about it, he stated that it was a signed match ball from Mahendra Singh Dhoni.

Meanwhile, MS Dhoni was Chennai’s lone warrior after they lost the toss and were asked to bat first by MI captain Rohit Sharma. The wicket of in-form Devon Conway in the first over was obviously the most significant turning point for them. Daniel Sams had him out lbw, but the ball had pitched in the middle and appeared to have missed his leg stump. Unfortunately for him, he was unable to take the DRS due to a power outage at the venue, forcing the New Zealander to return for a golden duck.

Also Read: Prithvi Shaw is set to return to the Delhi Capitals after recovering from illness in IPL 2022.