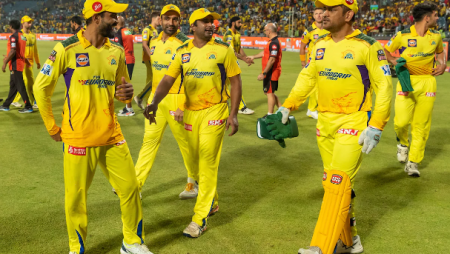 Pakistan Great On Chennai Super Kings’ IPL 2022 Struggles. While discussing CSK’s season and the entire captaincy saga. Former Pakistan pacer said that “management was not serious,” and that they should return next season with a fresh approach.

Defending champions Chennai Super Kings have had a forgettable season. Failing to qualify for the playoffs after being defeat by Mumbai Indians on Thursday. Since the start of the season, a lot has happened in the CSK dressing room. Including MS Dhoni stepping down as captain. With Ravindra Jadeja taking over as captain, CSK had one of the worst starts in IPL history, winning only two games out of a possible nine.

Chennai Super Kings: Jadeja decided to step down in order to focus more on his game, putting Dhoni back in charge of the team.

Former Pakistan pacer Shoaib Akhtar said of CSK’s season and the captaincy saga, “management was not serious,” and that they should return next season with a fresh approach.

“I had the impression that the CSK management was not serious. What will they do if Dhoni departs? Why did they suddenly give Ravindra Jadeja the captaincy? They were the only ones who could explain the decision. They must return next season with a clear mind. The players they require should be kept “During an interaction on Sportskeeda. Akhtar stated.

Dhoni’s future was also discussed by Akhtar. Who stated that the veteran wicketkeeper-batter will always be a “asset” to the team.

“If Dhoni wants to come as a coach…he did the same for India (in the 2021 T20 World Cup), and if he wants to continue playing for the next two seasons, that’s fine. Even if he takes on the role of mentor or even head coach and decides to lead CSK from there, it will not be a bad decision. He’s a valuable asset “He continued.

Also Read: Yuzvendra Chahal of RR takes on Jos Buttler in the nets in a hilarious battle ahead of the LSG game.