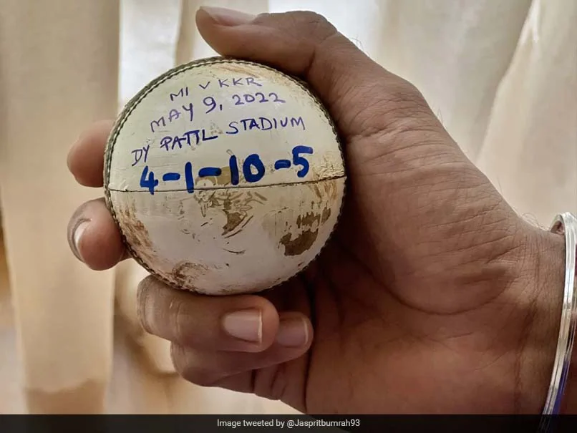 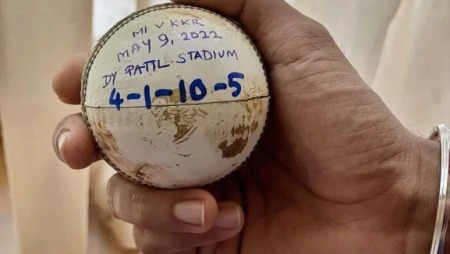 Jasprit Bumrah Posts Match Ball Pic On Twitter IPL 2022. Bumrah took to Twitter to express his disappointment that his personal achievement did not result in victory for his team.

Jasprit Bumrah had a rather poor season in terms of wickets taken in IPL 2022 until last week. The Mumbai Indians’ premier paceman had only taken 5 wickets in 10 matches and was having a disappointing season, much like his team. In a World Cup year, Bumrah’s lack of wickets in the best T20 league in the world must have worried even the India team management.

The paceman, however, chose to dismiss all concerns with a fantastic performance with the ball against the Kolkata Knight Riders on Monday, picking up his maiden five-wicket haul in the IPL. Bumrah returned with 5/10 to help Mumbai Indians limit KKR to 165/9. Although the MI batter couldn’t chase down the target and the five-time champions lost by 52 runs, it now appears that MI will finish last in the IPL table unless they win their remaining three matches by huge margins and CSK lose all of their remaining matches.

Bumrah’s outstanding performance drew widespread praise from cricket pundits and must have made the Indian team’s management members smile.

As his personal achievement did not result in victory for his team, the paceman took to Twitter to post a mixed message.

Also Visit: IPL 2022, MI vs KKR: There’s a lot of noise outside, but it doesn’t bother Jasprit Bumrah.

“Disappointed with last night’s result but a memorable evening nevertheless.” Posted Bumrah along with a photo of the balls match and him celebrating during the match.

Bumrah has now taken 10 wickets in 11 games this season. It’s also worth noting that he has an excellent economy rate of 7.41 runs per game this season.

Teams have planned not to attack or take risks against Bumrah this season, instead focusing on the other MI bowlers. As a result, Bumrah has not picked up many wickets. He and MI management will have to go back to the drawing board to come up with some plans for the upcoming season.

Also Read: ‘I’ll be back in no time,’ Suryakumar Yadav says after being ruled out of the IPL 2022.