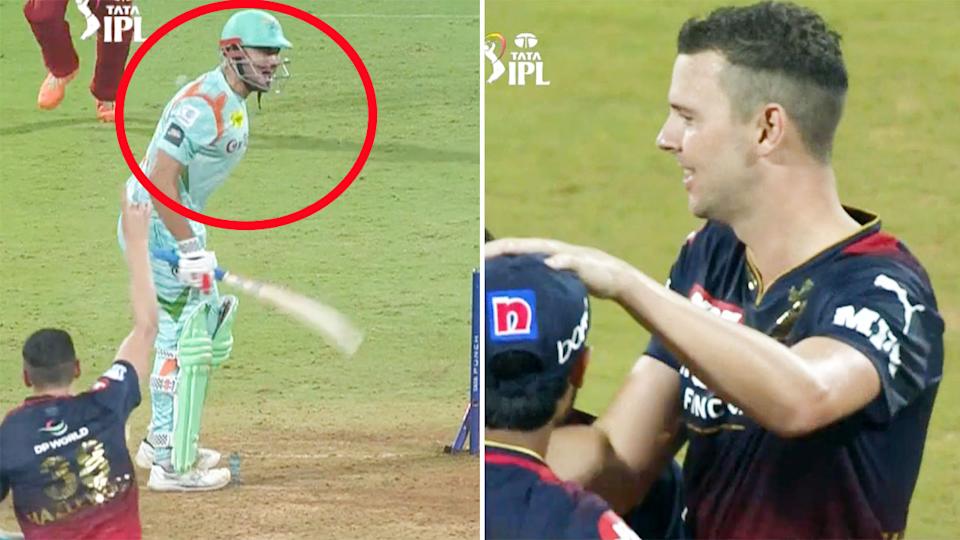 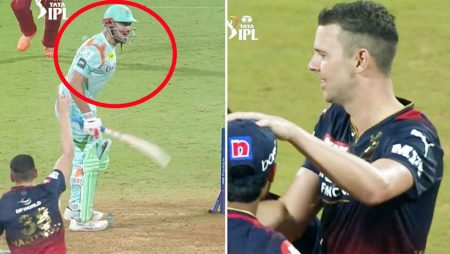 Royal Challengers Bangalore pacer Josh Hazlewood said he “got pretty lucky” with his very wide delivery that was not call wide by the umpire, resulting in Marcus Stoinis’ wicket in Tuesday’s IPL match against Lucknow Super Giants. Stoinis was out in the second ball of the 19th over while chasing 182 after shuffled far too much outside off, prompted by the previous Hazlewood delivery that landed almost off the pitch. With Stoinis moving across, the pacer went beyond the tramline and bowled it outside off, but the umpire, rather than calling it wide, ruled the delivery legal, much to the chagrin of the batter.

“I Got Pretty Lucky on that one. So I might have to buy him a beer after that”: Josh Hazlewood

“I tried to turn around as quickly as possible and return to my mark. I got lucky on that one, so I might have to buy him a beer after that “Hazlewood stated this during the post-match presentation ceremony.

As RCB won comfortably by 18 runs, Hazlewood finished with excellent figures of 4/25.

After some early hiccups, RCB skipper Faf du Plessis contributed with a fine 96, lifting them to 181 for six.

The 37-year-old former South Africa captain exhausted, but he persist until the end of their innings.

“I got a few 96s and a 97, so hopefully (a ton) is on its way. ” We needed someone to help us stabilize the innings and then get things going at the end. Today, I’m grateful that I was able to do it. It is critical that I am able to follow my batting blueprint.

“It never felt like you had enough power to clear the big boundary if you bowled slow into the wicket. I was exhausted, but I was still hoping to hit some at the end “According to du Plessis.

Despite early wickets, LSG captain KL Rahul said his team gave up too many runs in the powerplay.

“I thought we started really well after getting two wickets in the first over, but we should have done better than giving up 50 in the Powerplay. 180 on that pitch was an extra 15 or 20 runs that we gave up “Rahul stated.