PAK vs AUS: Ashton Agar is out of the ODIs after testing positive for Covid-19. 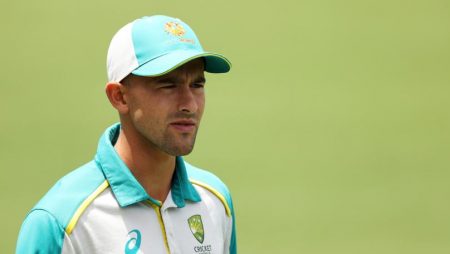 CANBERRA, AUSTRALIA - DECEMBER 02: Ashton Agar of Australia is interviewed ahead of game three of the One Day International series between Australia and India at Manuka Oval on December 02, 2020 in Canberra, Australia. (Photo by Cameron Spencer - CA/Cricket Australia via Getty Images)

PAK vs AUS: Ashton Agar is out of the ODIs after testing positive for Covid-19. Australia will play Pakistan in a three-match One-Day International series beginning March 29.

Ashton Agar, an Australian spinner, has been ruled out of the three-match One-Day International series against Pakistan in Lahore. Cricket Australia (CA) confirmed on March 29 (Tuesday) that the left-arm spinner tested positive for Covid-19. It’s worth noting that Agar is the second player in the visiting camp to test positive for Covid-19. Apart from team physiotherapist Brendan Wilson, batter Josh Inglis had previously tested positive for the virus. All of the other players and staff members tested negative.

The visitors will also be missing several key batters, including Mitchell Marsh, who suffered a hip flexor injury during spring training on March 28. (Monday). Similarly, due to an elbow injury, senior batter Steve Smith has been ruled out of the white-ball series. After winning the red-ball series 1-0, the visitors will face Pakistan in the one-day international series, which begins on March 29. (Tuesday). The series will be played entirely in Lahore, with the second match on March 31 (Thursday) and the third on April 2 (Saturday)

Also Visit: Lucknow Super Giants’ “tactical error” cost them the match against Gujarat Titans in IPL 2022, according  to Ravi Shastri.

Ashton Agar is out of the ODIs: Matt Renshaw, a left-handed batter, has been brought in as backup.

Due to the absence of several key players, Queensland batter Matt Renshaw has been added to the squad. The left-handed batter, however, will not be available until he has completed his three-day isolation period. So far, the 26-year-old has not appeared in an ODI for Australia. Renshaw’s Test statistics are as follows: the left-handed batter has played 11 matches and scored 636 runs at a respectable average of 33.47. He has also hit three fifties and one hundred in the game’s longest format.

With the first match beginning today, the visitors will consider playing two leg-spinners, which could allow Mitchell Swepson to make his ODI debut alongside another spinner, Adam Zampa. Meanwhile, Pakistan has named a strong squad for the upcoming series and hopes to begin with a series win. Following the ODI series, the two teams will play a one-off T20I in Lahore on April 5 (Tuesday).

Also Read: Weather Forecast for SRH vs RR in IPL 2022