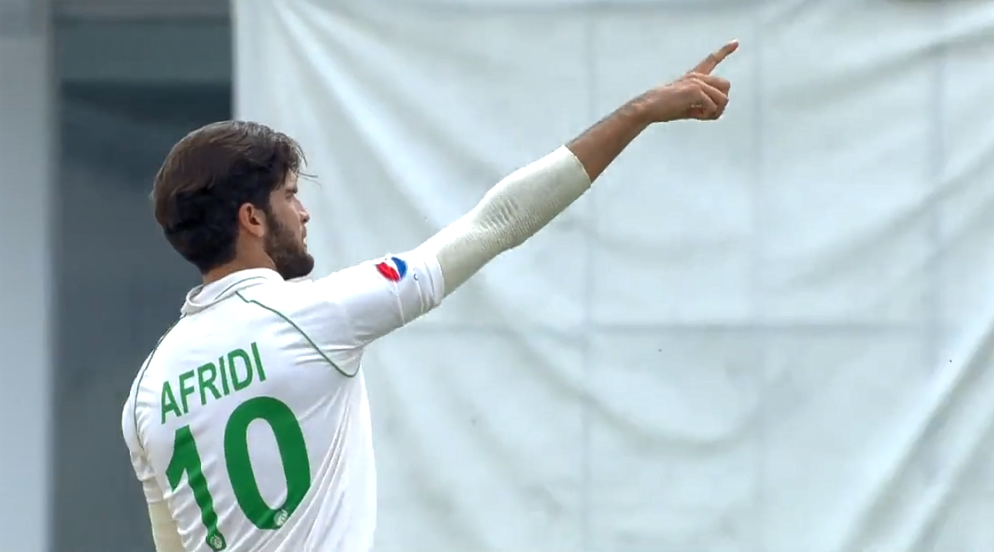 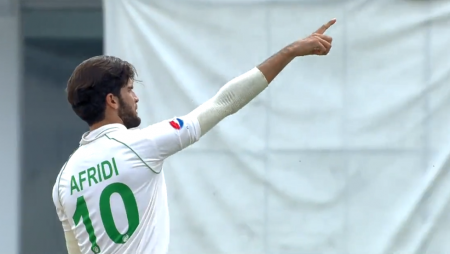 Shaheen Afridi’s Classic Celebration After Dismissing Labuschagne in the 1st Test. Pakistani bowler took the crucial wicket of Marnus Labuschagne, who appeared to be on his way to a three-figure mark.

Pakistan cricket’s star player, Shaheen Afridi, stunned Australia when his captain needed it the most. Demonstrating the fast bowler’s brilliant purple patch. Despite the fact that the start of Day 4 is delay due to rain. Resulting in the loss of the first session entirely, the match began after lunch. Australia batters Steve Smith and Marnus Labuschagne returned to the crease with the team on 271/2. Picking up where they left off at stumps on Day 3. Despite the fact that Pakistan’s bowlers looked quite penetrative with the old ball, skipper Babar Azam pounced on the first opportunity to use the new ball after the 80th over, handing it to Afridi.

The first over with the new ball bowl with vigour against Labuschagne, who failed to score a single run off Afridi.

The second over with the new red cherry looked a little shaky, but Labuschagne got five runs out of it.

However, it was the final ball of the crucial third over with the new ball that helped Afridi get the crucial wicket of Labuschagne on 90 runs.

“The ‘Afridi’ celebration you were waiting for. The crowd roars. @iShaheenAfridi dismisses Labuschagne. #BoysReadyHain l #PAKvAUS.”

Afridi decided to bowl a widish delivery after being smacked for a boundary off the previous ball, forcing the batter to reach for the ball.

With his bat away from his body, Labuschagne looked to drive towards the cover region. Labuschagne, on the other hand, failed to account for some lateral movement off the deck, resulting in him nicking it to the only slip in place.

Soon after the wicket, Shaheen burst into his trademark celebration of raising both arms and enjoying the applause from the crowd.