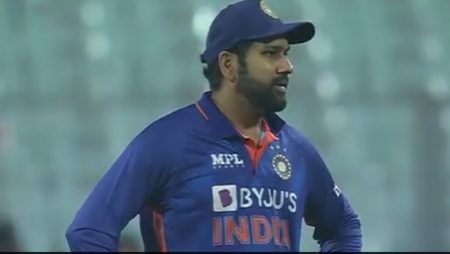 Ravi Bishnoi, a young leg-spinner making his debut, wowed everyone with a match-winning performance. Bishnoi, who made his T20I debut on Wednesday, kept the West Indies batters guessing and finished with 2 for 17, earning him Payer of the Match honors. The youngster, on the other hand, did not have the best start to his debut, as he had a misstep in the outfield.

Chahal bowled a flighted delivery that Nichola Pooran looped straight down the ground. However, when attempting to move backwards, his foot came into contact with the boundary rope.

Pooran not only survived, but he also scored six runs as a result of it.

Before the toss, Bishnoi received his India cap from veteran leggie Yuzvendra Chahal. “I was overjoyed when my debut cap was presented to me. The cap was given to me by Yuzvendra Chahal, making it even more special. I was given the opportunity, so I did my best to perform well on the side. The plan was to bowl on the correct line and length while not giving the batters much room “After the match, which India won by six wickets to take a 1-0 lead in the three-T20I series, he said on Chahal TV.

Rohit, too, was full of praise for Bishnoi. “Bishnoi is a very talented player, which is why he was drafted right away. We notice something unusual about him. He carries a wide range of variations and skill sets. He can bowl at any stage, which gives us a lot of options for rotating the other bowlers. He’s very happy with his first game for India, and he’s got a bright future ahead of him; it’s just up to us now to figure out how to use him “Rohit explained.