After retaining the Ashes, Australian cricketers are “speechless”: “I had no idea it would be over so quickly.” 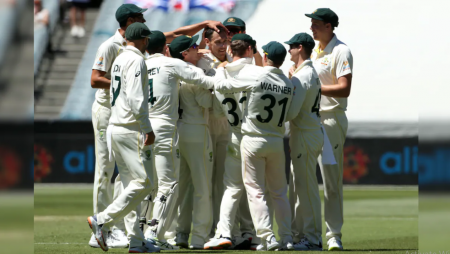 After retaining the Ashes: Scott Boland, who was named Player of the Match after returning with incredible figures of six for seven in the second innings, described himself as “speechless.”

On Tuesday, Australian players “couldn’t believe” their “insane” victory over England by an innings and. 14 runs in the third Test at Melbourne Cricket Ground. To win the third Test and retain the Ashes, the Pat Cummins-led team knocked England out for 68 in the second innings. They already have a 3-0 lead in the five-match series and appear to be on their way to a clean sweep against a struggling England team.

After retaining the Ashes, bowling England out in just 27.4 overs on Day 3, Australia captain Pat Cummins and star of the show newcomer Scott Boland revealed their thoughts. Boland, who was named Player of the Match after taking six for seven in the second innings, described himself as “speechless.”

“I’m speechless, too; I had no idea it would end so quickly. That is my best-ever figure; nothing has ever happened so quickly in my life. They (the audience) were incredible, and going down to the border gave me a genuine rush “he stated

Boland, who was brought in as an injury cover, made a sensational debut, taking 7 wickets in the match. On Christmas Eve, the right-arm seamer learned that he would receive his Test cap for the Boxing Day Test.

“I can’t believe it. When we came in, we thought we had a chance to win today, but not so quickly. I found out on Christmas Eve, and my teammates and family were quite supportive. It was a huge step up from anything I’d done before, and I knew it would be difficult. I’d want to express my gratitude to the audience for their tremendous support over the last three days. There were around 17 of us who learned about the 1868 tour, and my family and I are ecstatic to have won this honor. I’d want to thank the coaches for giving me the opportunity to play on my home turf, as well as my parents, wife, and two children “After the game, Boland remarked.

Visit also: Is There A Yellow Alert