A.Chopra, believes R.Gaikwad would be selected for South Africa’s ODI’s 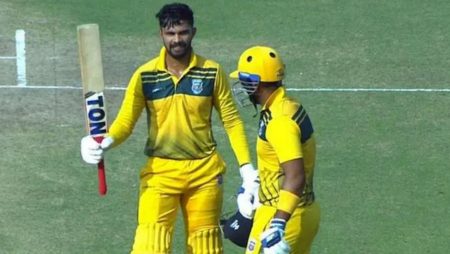 A.Chopra, believes R.Gaikwad would be selected for South Africa’s ODI’s.

Ruturaj Gaikwad, according to Aakash Chopra, is in a different level when it comes to wielding the willow.

Ruturaj Gaikwad is in the greatest condition of his life right now. In the Vijay Hazare Trophy, the right-hander has scored a massive 603 runs in just 5 innings. With a gigantic average of 150.75.

Gaikwad has four centuries so far in the tournament. Aakash Chopra, a former Indian opener, has showered admiration on Gaikwad. Gaikwad, according to Chopra, is treating the bowlers he is facing like children. Chopra believes Gaikwad is in a different league with the way he wields the willow, noting that Gaikwad was playing the sweep stroke against fast bowlers.

“Ruturaj Gaikwad is the first name, the name at the top. He’s hit four century and had three hundreds in three matches at one time, and no one could get him out. I got to see a few of his innings. He appeared to be playing against children.

Who does that? He was only playing sweep shots against quick bowlers. Against the spinners, play inside out fours. “The bowlers were fine, but Ruturaj appeared to be in a different level altogether.” Chopra stated on his YouTube page.

Ruturaj Gaikwad, in my opinion, is ready for the Indian team: Aakash Chopra

Ruturaj Gaikwad, according to A.Chopra, has amassed over 600 runs in the Vijay Hazare Trophy, as well as four centuries. Gaikwad is now ready to wear the Indian blues, according to the 44-year-old, and Gaikwad’s name will undoubtedly be addressed when the selectors decide India’s ODI squad for the upcoming trip of South Africa.

2 Replies to “A.Chopra, believes R.Gaikwad would be selected for South Africa’s ODI’s”