Ravindra Jadeja “Is Being Selected Over Ravichandran Ashwin” Overseas, an ex-India cricketer explains. 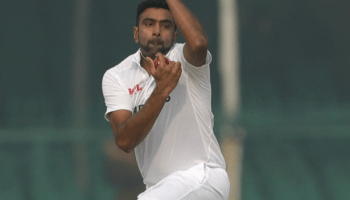 Ex-spinner Pragyan Ojha reviewed Ravindra Jadeja’s selection over. Ravichandran Ashwin in away Tests and revealed the logic for the team management’s decision in recent matches. In an interview with former Indian cricketer Aakash Chopra on. YouTube. Ojha outlined why Jadeja is a superior all-round package for overseas Tests. Ojha discussed how previous spin greats. Anil Kumble and. Harbhajan Singh were chosen. As the key spinners. With Harbhajan Singh receiving. A chance when the opposition team had more left-handed bowlers.

Ravindra Jadeja “Is Being. Selected Over Ravichandran. Ashwin” Overseas. “The team’s mindset was different when. Anil Kumble and Harbhajan Singh were on the field. India possessed two specialist spinners in Kumble and Harbhajan, something the team administration had long desired. Both of them were outstanding. As a result. Harbhajan would play when the opponent had more left-handed batsmen in their lineup, while. Kumble was typically present as the team’s first spinner “Pragyan Ojha expressed his thoughts.

According to Ojha, the team’s mindset has shifted, with the management opting to send five batters overseas.

Jadeja’s consistent batting performances in foreign settings, he claims, are the basis for his selection ahead of Ashwin.

“Now, the mindset has shifted. The skipper prefers to use five batters. When you go in with five batters and Jadeja as an option, he consistently scores 30-40 runs in away games and 60, 70, or 80 runs in Indian games. As a result, both spinners will play in India, with Jadeja making a good case for himself in international Tests. Perhaps this is why he was chosen over Ashwin.”

Both all-rounders are part of the Indian team that will face South Africa at the SuperSport Park in Centurion on December 26.

Therefore, From January 3 to 7, 2022, the second Test will be held at the Wanderers Stadium in Johannesburg. The third and final Test of the series will be held in. Newlands, Cape Town, from January 11 to 15.

Visit also: Are There Any Current

One Reply to “Ravindra Jadeja “Is Being Selected Over Ravichandran Ashwin” Overseas, an ex-India cricketer explains.”