India vs. South Africa A A: The Indian subcontinent On Day 1, the Pacers pick up five wickets to help South Africa reach 233/7. 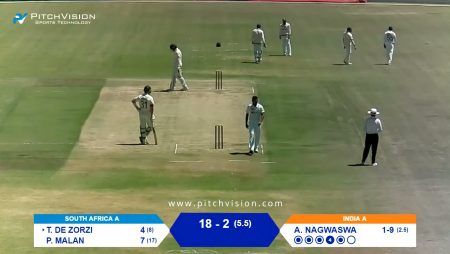 India vs. South Africa A A: India South Africa A scored 233 for seven on the first day of the second unofficial. Test on Tuesday, thanks to five wickets taken by pacers.

India South Africa A scored 233 for seven on the first day of the second unofficial Test on Tuesday, thanks to five wickets taken by pacers. Navdeep Saini (2/54), who has been dropped from the Indian team, Ishan Porel (2/26) and left-armer Arzan Nagwaswalla (1/44) shared five wickets, while spinners Saurabh Kumar (1/64) and Baba Aparajith (1/34) each took one batter.

India vs. South Africa A A: On day one, George Linde (44) was his team’s leading scorer with 44 points. Before openers Sarel Erwee (38) and Raynard van Tonder (34) forged a 72-run combination, Nagwaswalla got rid of opponent skipper Peter Malan (0) in his first over.

South Africa has chosen to bat. A hitters Zubayr Hamza (31) and Sinethemba Qeshile (32) and Linde (44) got off to a promising start, but Indian bowlers struck at regular intervals and they couldn’t go the distance.

Linde hit three fours and one maximum in his knock. Before Saini dismissed him in the 83rd over, he had a 53-run combination with Marco Jansen (38 not out).

Abhimanyu Easwaran and Sarfaraz Naushad Khan both remained wicketless after bowling one over each.

Visit also: According to BioNTech CEO, Covid Shots are likely to protect against the worst of Omicron.