After winning the T20 World Cup, Australian cricketers drink from their shoes. 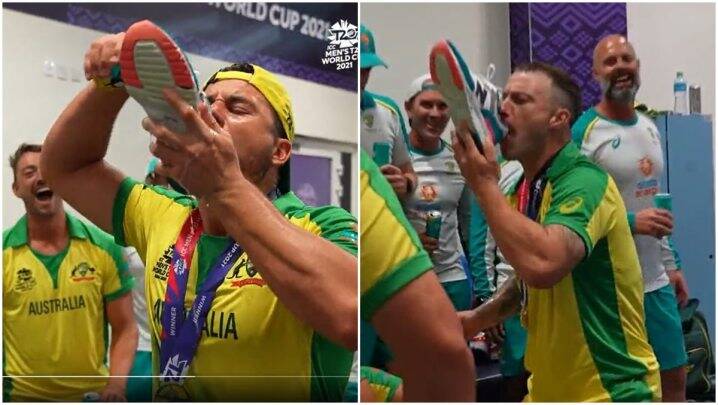 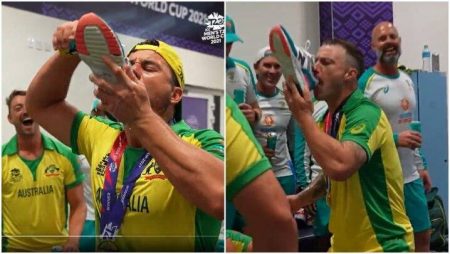 After winning the T20 World Cup, Australian cricketers drink from their shoes.- In Australia, the habit of drinking directly from shoes is known as ‘doing a shoey.’

The one-day cricket’s most successful team’s 20-overs title drought was an outlier for Finch, who exuded confidence that Australia would “right” the wrong.

Marsh and Warner combined for 92 runs to defeat  Williamson’s team. Who had set a competitive total courtesy to his superb effort. Williamson used an early break to catapult his team to a 172-4 lead, which they couldn’t maintain in the end.

On Sunday, celebrations in the Australian cricketers locker room at the Dubai International Stadium lasted until late into the night.

The ICC uploaded a video of wicketkeeper-batsman Wade and all-rounder Stoinis standing up from the floor, pouring beer into their shoes, and drinking from them.

Stoinis then proceeded to soak his shoe in beer before taking a sip. Before exploding into song and dance, Finch did the same. In Australia, the habit of drinking directly from your shoes is known as ‘doing a shoey.’

It was Australian Formula One driver Daniel Ricciardo who made the ‘shoey’ celebration popular around the world. Although it was already popular in their country. He did it for the first time after finishing on the podium in the 2016 German Grand Prix. The celebration caught on with Ricciardo doing it with fellow podium finishers and celebrities who were part of the ceremony.

One Reply to “After winning the T20 World Cup, Australian cricketers drink from their shoes.”